A Playhouse To Call My Own

Daddy’s been threatening for a while that if I don’t start “pulling my weight around here,” I’ll have to move out.  He says even Hairy Dog earns his keep by keeping the postman outside.  I didn’t think he actually meant it though, not till at least I leave school and I don’t start for a couple of years yet!


Imagine my horror then when I came home and Daddy took me outside to see a little house built in the garden!  He wasn’t kidding!  Don’t get me wrong, he’s done it really nicely, but I’m too small to move out!  Who will hear my calling for my dummy at night if I’m sleeping in the house in the garden?!
Panic is now over though.  Mummy explained.  It’s a “Christmas present,” and it’s not a proper house, it’s a playhouse, made by Big Game Hunters.
You can have a look at all my house’s specifications here, not to mention all the others. Mine is a Whacky Ranch house, under Funky Playhouses, and boy is it funky! It’s green, with two windows, and it’s exactly how a little child would draw a house. 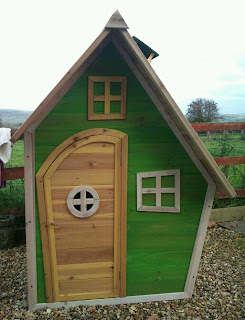 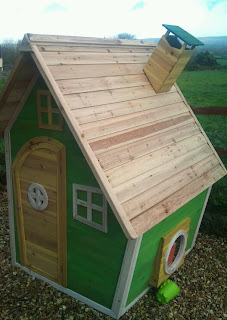 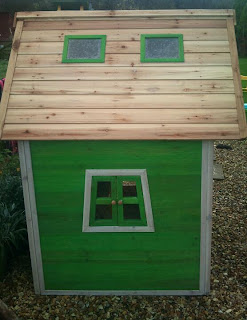 It retails at £259, and with property prices the way they are, I think it’s a bargain.  An estate agent might describe the interior as “compact and bijou,” but it fits my needs perfectly.
I would say anyone between about 18m – 6 years would get a lot on enjoyment out of this, perhaps even longer.  At the moment, I love the idea of just being inside and closing the door, then looking out of the window to point and laugh at Mummy.  I imagine in later years it’ll be a great little den, somewhere I can take my book to read on my own and get away from the rest of them.
I have two little wooden chairs in there now, courtesy of my grandparents, so I can comfortably entertain a friend, and it being so close to Christmas, of course I have a tree.  That’s 3ft tall, to give you an idea of how big the house is. 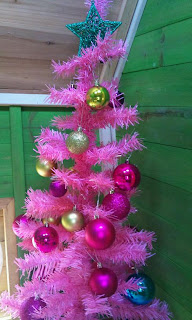 Daddy built it on his own, although the instructions advise two people to do it.  It took him an hour and a half against the suggested thirty minutes, but he was on his own and it was dark, so I think that’s probably accurate.  It comes as panels, so it’s easy enough to do.
We thoroughly recommend the Whacky Ranch house from Big Game Hunters, so if you’re still looking for a Christmas present for your little one, or birthday presents next year, I think this is fantastic.  It sits straight on the grass if you want, or you can buy a floor for it to stand on.  I have a floor, so it means I can use it all year round.  The house itself is all treated and guaranteed for ten years.
Mummy says all her dealings with the people at Big Game Hunters were great – they were very helpful and quick to respond.
Disclosure: Mummy and Daddy were looking for a playhouse for me for Christmas and because I still don’t really ‘get’ Christmas, they didn’t mind giving it to me early.  Neither Mummy nor I received payment for this review although Mummy was given a 40% discount on both the house and the floor. (We bought the tree at the supermarket.)
at 21:03

Email ThisBlogThis!Share to TwitterShare to FacebookShare to Pinterest
Labels: review

Go on, leave me a comment - they make my day.

Looking for something in particular?