Before a first baby arrives, it seems a perfectly normal state of mind for parents to seem a bit daunted by all the ‘stuff’ they seem to need.  The lists are endless.  And they have to be believed because you wouldn’t want to find yourself without a bottle-warmer in the middle of the night, would you?

Mummy and Daddy did their best, but there are things they’re not planning on using when my sister arrives.  Like a nappy bin.  Seemed like such a good idea originally, but unless you’re emptying it really frequently, you end up with a really stinky nappy sausage when you eventually take the lid off.  And how heavy!  We empty the kitchen bin most days anyway so I think they’ll just go with that this time round.

One thing we didn’t have when I was tiny was a Flexibath.  In all honesty, when we first heard about it, we thought “gimmick.”  When would we ever use that?  How wrong we were.  It’s fantastic!  We were given a shiny red one to review (which is what you’re reading now) and we can’t praise it enough.

So what is it?  Essentially, it’s a baby bath.  But it’s one with a difference.  It folds flat for easy storage, and therefore easy transportation.  It would easily fit into a suitcase, to avoid those nasty baby/basin bathing dilemmas, like my holiday in France when I was just six weeks old.  Taps are sore!  And so are plugs!  I was just too small for the big bath in those days, but your standard, non-collapsible baby baths just don’t fit in a car full of suitcases, pushchair and other associated baby paraphernalia.

With everything that’s going on this year, we don’t have a holiday planned so we won’t be able to test out the bath abroad with my baby sister, but I’m sure we’ll use it here.  And in the meantime, I love it myself, and I’m conducting extensive testing most nights.
It measures 66.5cm x 38.9cm and it’s 23.8cm deep.  It has no nasties in terms of what it’s made of either (no PVC, no heavy metals, no phthalates – think new car smell – or any other potentially hazardous materials).

The other points we think are worth mentioning are: 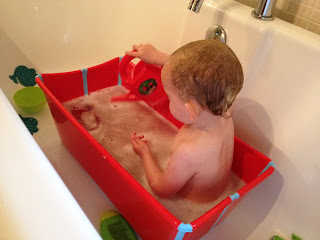 Neither I nor Mummy received any payment for this review and all opinions expressed are our own.  We think it’s a fab bit of kit!  It comes in lots of different colours and is available online from the lovely people at Whitestep, who supplied us with ours and also do some other rather handy little things,  at £29.95.

So, there's my tip for a "can't live without" product - any more we shouldn't be without?

A Disgraceful Lack Of Posts!

Yikes, it’s been over a month since my last post! (Nearly two, if you look closely!) I’m slacking in my old age!  In that time, so much has happened.  In brief summary, and not in any particular order:

It’s been a really exciting month, all in all.  Fuelled by the lovely people at Plum Baby, I’ve taught myself to do roly-polies, much to Mummy’s dismay.  The Plum crew sent me some really yummy Oaty Chomp bars – strawberry cheesecake flavour!  They don’t have any nasty added salt or sugar (just strawberries and raisins to make them sweet) and as the name suggests, they’re made of organic oats and quinoa.  At 20g, they’re a perfect snack size, although I often try and hold out for a second – a growing girl needs plenty of energy, after all – and although I can’t manage the wrapper yet, I have no trouble holding the bar and shovelling it into my mouth.

Speaking of shovelling, that describes perfectly how the multigrain crispy rings pass my lips!  Cheddar was my favourite (in fact, there is also Gouda in there) but I was rather partial to the Tomato rings, too.  Again they use quinoa, but also corn and rice, and something called ‘teff,’ which is rich in fibre, iron, protein and calcium – perfect for helping toddler gymnastics!

So, about the gymnastics.  I couldn’t really tell you where I got my inspiration, I just fancied giving it a go.  I’m not ready for Olympic Roly Poly competition yet but there’s still time.  I get a bit lop-sided every now and then, and I have a tendency to go over on my head rather than tuck it in, but it’s another pretty fancy move to my repertoire.  Oh, and I got a trampoline for my birthday so life is pretty energetic around here these days!

You can buy Plum products direct from them online at www.plum-baby.co.uk, or from the major supermarkets, as well some other retailers.

Hairy Dog nearly drowned in next door’s pond because he fell in and hadn’t told anyone he was going out.  Thankfully Daddy noticed he was missing and went to look for him.  Everyone was frightened, not least HD and the fish in the pond!  I hear about the pond and how dangerous it can be A LOT at the moment. Yeah, yeah, yeah.

Looking for something in particular?